Get Fit and Lose Weight

One of the ways in which a lot of people discover what appears to them to be an amazing secret about losing weight is in what happens to their bodies when they start exercising to get themselves fit. It can seem quite surprising at the outset, when after steadily building up their daily quota of fitness exercises for a week or two they innocently weigh themselves only to find they have actually lost a few pounds! 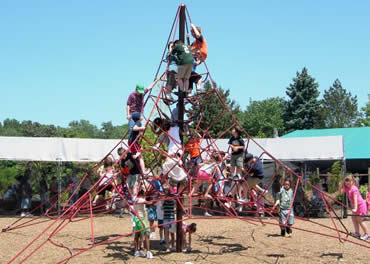 To the serial health conscious person, this is no secret, but comes under the umbrella of those handy tips for losing weight that help so many people to shed those unwanted extra pounds simply by doing something that they weren't intending to be an exercise in losing weight, but instead in getting fit! So what is going on when a particular series of workouts culminates in a child dropping a few pounds of unwanted fat, even when they didn't start a new diet?

It Works for All Ages

Doing any strenuous physical activity for any length of time will cause a person's body to first burn the sugars present in the bloodstream. When that is exhausted, more is sourced from fat stores.

This is true no matter what age you are, making this practice as effective for children as it is for adults. Kids naturally burn off a lot of energy running around and playing, but these days it's not enough to counter the high levels of calories they consume.

It's primarily about metabolism and how the body deals with the energy it receives from the food a person consumes. A person who is at rest of most of the day and said to lead a sedentary lifestyle tends to have a quite sluggish metabolism because there is not much going on physically with their body.

They are prone to weight gain even when they don't eat a particularly large amount of food. In fact, many office workers who exist on a relatively small amount of food can still be overweight, when their colleagues who so no more than they do can appear to remain thin while eating whatever they want.

The difference is their metabolism, or metabolic rate. Some people who don't appear to do very much physically during the day can still have a high metabolic rate if they use a lot of nervous energy through constant fidgeting. These are the serial pen tappers and leg judderers that may be sitting down but they just never sit still!

Do It Every Day

When you are exercising daily, even if it is light exercise, you are using muscles and those muscles are using energy. An active person will burn much more energy than an inactive one.

This is a basic law of physics as well as one of those handy ways to reduce fatty body mass. So by undertaking a fitness program on a daily basis, you are going to be burning a lot more energy than if you just sat around doing nothing all day.

So you can literally say that when you are in the process of getting fit, you are going to lose some weight along the way. This is simply because your muscles are using more energy than you are taking in through your food and you are creating a negative calorie balance.

The shortfall is made up by your body taking from its store of fat. Hence, you get fit and you lose weight in the process!